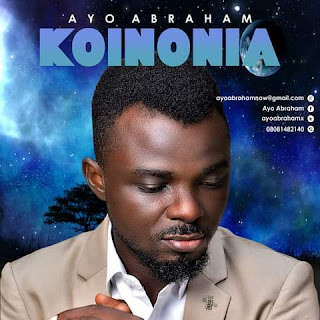 Koinonia (The fellowship of the Spirit) a Greek word is the title of this album release, and the title of one of the four songs on this album. All the songs full of soul, and Spirit, will get you into the manifest presence of God. With these songs get ready for an encounter with God.
Ayo Abraham,  an anointed minister of the gospel and outstanding gospel artiste is out with this album Koinonia on all stores.
Ayo Abraham is a prolific songwriter and singer, who come a long way, having being in the choir since the year 1999.
He is happily married to Nancy Abraham, and they are blessed with three boys.
He was first seen on the Nigerian gospel scene with a single titled high and lifted in 2016 and has since then been doing a lot writing and releasing album, with an 18 track album in 2020.
His new 4 track album, Koinonia is a special one which he has poured a new anointing for healing, lifting, and answered prayers.
Listen Here –
DOWNLOAD MP3

GOSPEL TUNES SONG OF THE WEEK

BE THE FIRST TO GET OUR LATEST UPDATES

GOSPELTUNES VIDEO OF THE WEEK